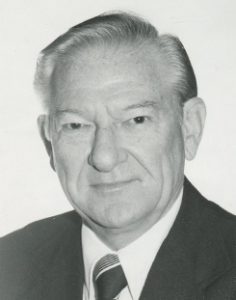 Colonel Hayden P. Mims became NCARB’s executive director in August 1968—the first NCARB executive who was not an architect. During his years of leadership, Mims provided the Council with stability, streamlining administration and expanding NCARB services. He oversaw the expansion of NCARB staff, enabling the organization to manage exponential increases in the number of NCARB Record and Certificate holders. Mims also led NCARB’s initial foray into converting paper Records into computer files.

Mims joined NCARB following his retirement from the U.S. Air Force, where he served for 25 years. He received multiple awards for his military service, including the Legion of Merit, three Distinguished Flying Crosses, five Air Medals, the Air Force Commendation Medal, and the China War Memorial Medal. He graduated from the University of Maryland.

“This continued growth and demand for our services indicates that more people are learning about NCARB. I also think they are becoming more dependent upon NCARB and trust us more than they used to. … We are getting more involved in other areas, in the student areas, in the collateral areas, and NCARB is becoming more important to the profession than it has ever been.”