Throughout the past two decades, NCARB has worked to embrace the values of being open, responsive, and restless. While the organization has evolved to keep pace with current practice, its mission to protect the public remains the same.

During the first two decades of the new millennium, every aspect of NCARB’s operations and culture continued to evolve. The Council developed a new focus on adapting to change, being transparent with members and customers, and increasing direct communication.

Understanding that each person’s professional path is different, NCARB launched an outreach initiative in 2009 aimed at helping candidates as they navigated the licensure and certification process. Through the program, architects from NCARB’s Experience + Education and Examination directorates began to regularly visit every program accredited by the National Architectural Accrediting Board (NAAB), as well as American Institute of Architects (AIA) chapters, firms, and conferences across the country. 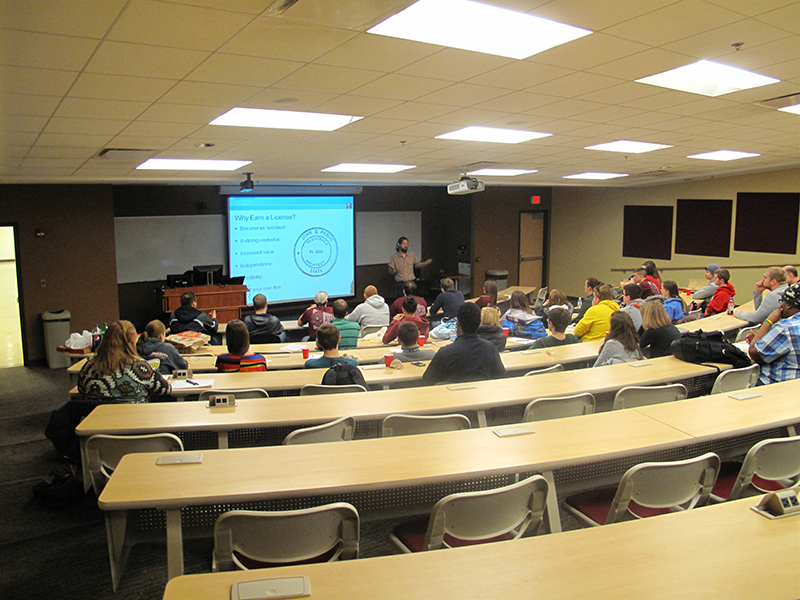 Members of NCARB’s outreach team help explain the organization’s programs and services to licensure candidates and architects across the country.

When CEO Michael J. Armstrong joined NCARB in 2011, he expanded the outreach program to include the licensing boards that make up NCARB’s membership, as well as renewed efforts to engage with NCARB’s collaterals. Thanks to this expanded vision, NCARB personally connects with thousands of people each year to answer questions, encourage uniform licensure requirements, and provide personalized help.

Meanwhile, the evolution of technology saw NCARB’s online presence become an additional form of outreach to customers, members, and the public. As NCARB’s website, digital communications, and outreach activities became more central to the organization’s operations, the Council’s Communications staff and strategy adjusted and expanded. Newsletters moved from print format to digital. Announcements and press releases were distributed on the website and by other online channels. The Council’s program guidelines shifted from paper to the website, a win-win in terms of both efficiency and expense. 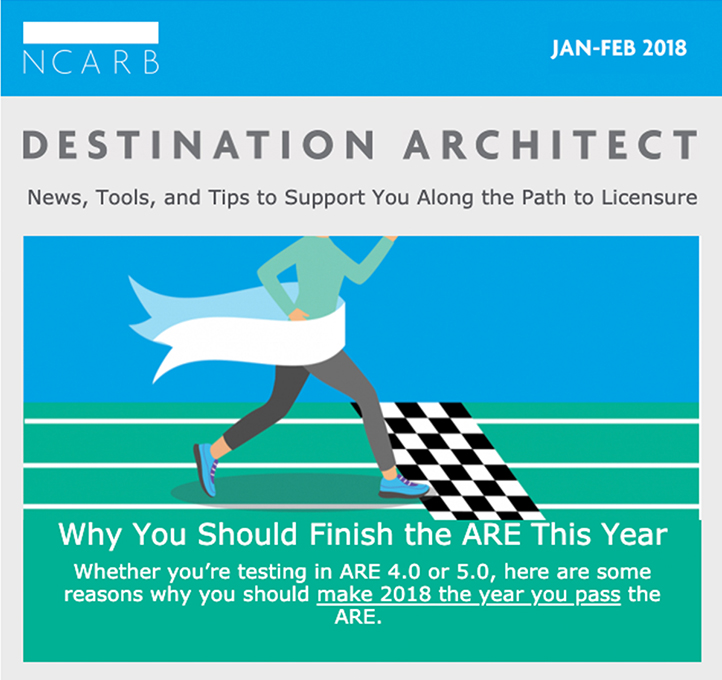 NCARB’s “Destination Architect” newsletter provides tips, resources, and advice to individuals on the path to licensure.

In 2009, NCARB joined social media. Appearing on Twitter, Facebook, Instagram, YouTube, and LinkedIn, the Council could quickly share news, tools, and program updates, as well as increase openness and transparency into its activities. By using tools to monitor customers’ perceptions of NCARB online, NCARB worked to spot problem areas and improve communications to create better customer satisfaction. As program and organizational changes took hold, the sentiment shifted gradually from largely negative, to neutral, to supportive of the new and improved direction the organization was taking. 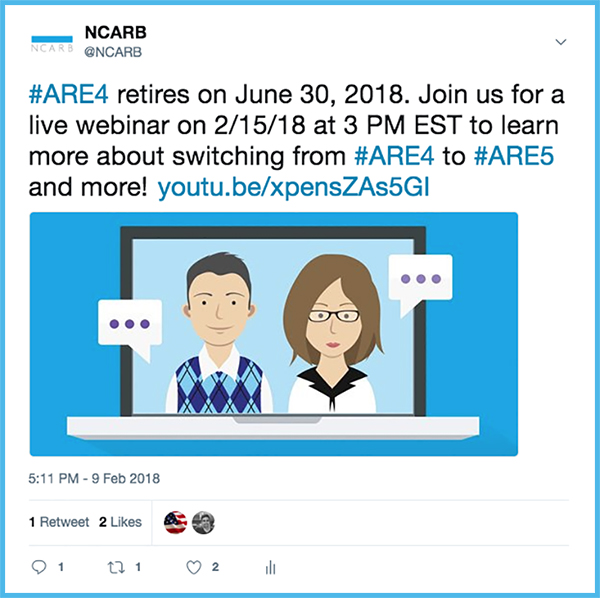 The NCARB Blog and NCARB Live webinar series launched in 2014, providing in-depth, interactive explanations of NCARB’s programs and services. Plus, through its new Architect Registration Examination® (ARE®) online communities—on Google+ for ARE 4.0 and a separate forum platform for ARE 5.0—candidates could connect with and support each other online, posting questions and getting advice from NCARB’s expert moderators.

Not only did the expansion of communication efforts help candidates and architects, but also the Council itself. By engaging with its members and customers on so many levels, NCARB better understood their needs and could adjust its processes to create better services. 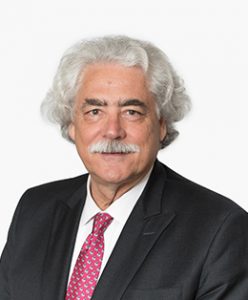 “NCARB has changed a great deal in the years that I’ve been involved with the organization. … I think they are much more open and transparent in their communications.”

With so many communications efforts underway, NCARB recognized that brand consistency across its various channels was a must. The Council’s programs had been siloed for decades, lacking visible links to each other or to NCARB.

The familiar blue bar on NCARB stationery, publications, and the website was updated to a brighter blue and the typeface was modernized, a visual signal of a more contemporary, approachable NCARB. In addition, each of NCARB’s core programs—including the NCARB Education Standard, Architectural Experience Program® (AXP®), ARE, and Certificate—were given a similar logo, featuring a distinctive color palette and incorporating the signature blue bar. 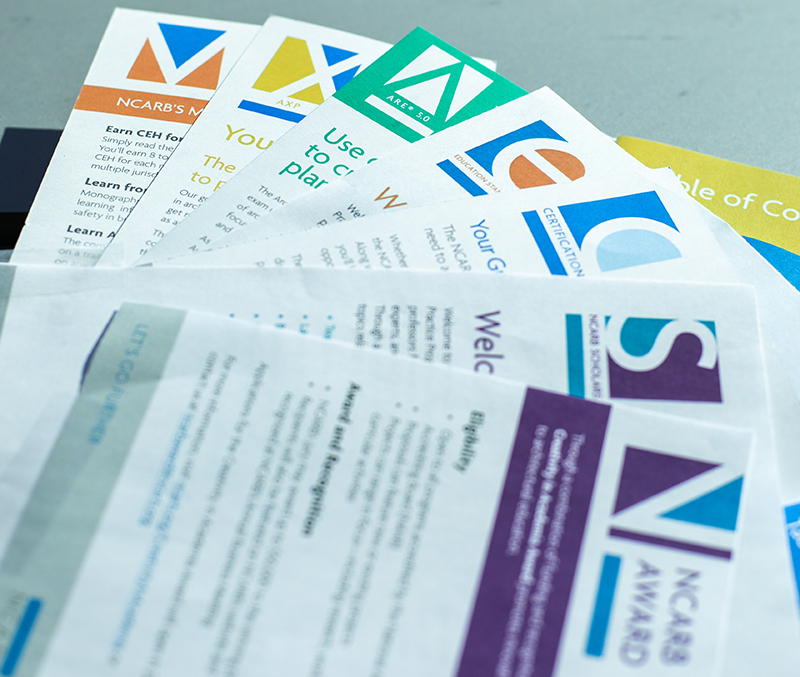 The logos of NCARB’s core programs were redesigned to create a cohesive, recognizable brand.

But the brand went beyond visuals. NCARB also wanted to create an organizational culture that matched its new relationship to its customers and its modernized visuals. In 2015, NCARB introduced “Let’s Go Further” as an organizing statement that would guide its interactions with stakeholders at every level, as well as new corporate values: to be open and transparent, responsive to customer needs, and restless in developing new solutions.

At the dawn of its second century, the Council finds itself at the forefront of professional regulation. NCARB’s experience in data-mining has drawn attention to its expertise in looking at the big picture. Publications in other professions have showcased the Council’s improvements, presenting NCARB’s success as a model from which others can learn. NCARB has gained new allies in other fields by demonstrating that licensure requirements can protect the public without creating unnecessary barriers.

Precisely what the future holds for architecture and other professions will depend on many factors. As technology continues to impact the architecture, engineering, and construction fields, the role of the architect continues to be questioned and debated. Environmental issues, sustainable design, and ethical behavior are all frequent subjects of discussion and debate.

The Council has launched several new initiatives to tackle these topics: a special work group charged with examining how resilient design can be incorporated into NCARB’s programs; an Ethics Task Force charged with examining the role regulation plays in encouraging professional conduct while thoroughly updating NCARB’s Model Rules of Conduct; and a Model Law Task Force responsible for the first multi-year review and comprehensive overhaul of the Council’s Model Law and Model Regulations. 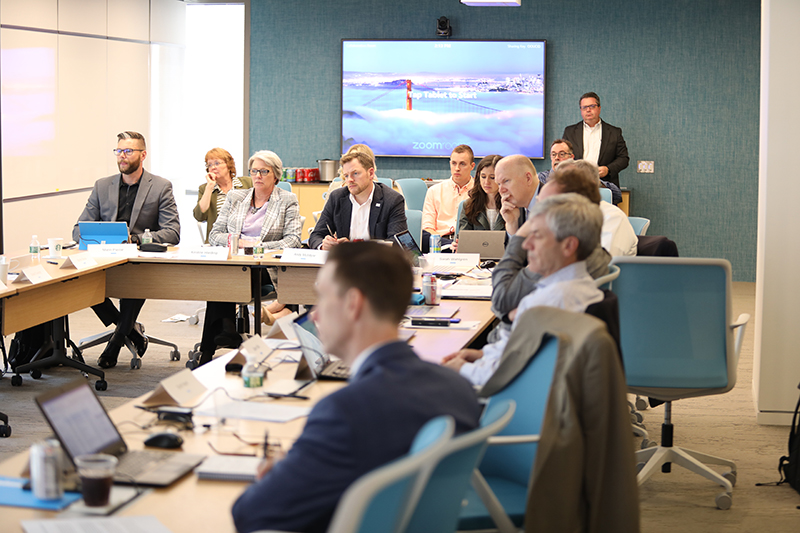 NCARB’s Futures Task Force is exploring how architectural regulation might evolve in the coming years.

In addition, NCARB has created a Futures Task Force, which has been charged with investigating and predicting the likely challenges and opportunities that might impact the regulation of the profession in the years to come. NCARB has worked diligently in recent years to be ready to respond creatively to change, while maintaining its unwavering commitment to protect the public first and foremost—a sacred trust that has been passed from generation to generation. 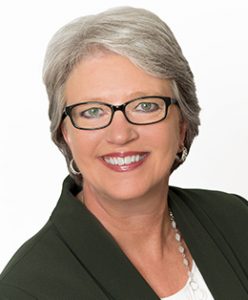 “People [who] admire the profession really hold architects to the standard of bettering the environment in which we work and play, the places we go for public services. The public really trusts us; they expect us to provide them with the right solutions.”

In the meantime, NCARB has positioned itself not only to respond thoughtfully to whatever the future holds, but to help shape that future. Supported by cutting-edge technology, and an army of dedicated volunteers, NCARB’s Board of Directors, Member Boards, staff, and committees continue to carry on the important work that Emery Stanford Hall, Emil Lorch, and their colleagues set in motion 100 years ago. As NCARB begins its second century, the Council’s founding idea of bringing together thoughtful people with innovative ideas in the name of a greater good—safeguarding the public—is as powerful, relevant, and resilient as ever. 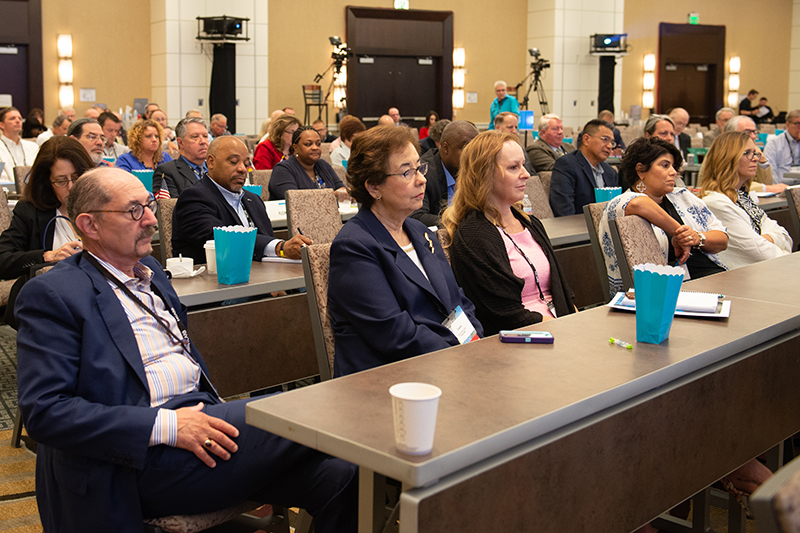 NCARB’s members gather in 2018 for the organization’s Annual Business Meeting.