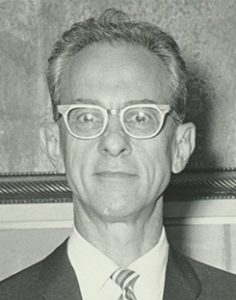 James Rich, FAIA, became NCARB’s acting executive director in October 1967, after having served multiple years as the assistant to the executive director. During his leadership, Rich worked to improve services to jurisdictional licensing boards and improve staff turnover. He also served as the staff liaison on multiple NCARB committees, including the Committee on Arrangements.  Following Hayden P. Mims’ appointment as executive director, Rich continued working for NCARB as the director of professional services until 1969.

After leaving NCARB, he worked for the New York State Board for Architecture as its secretary/director. Rich earned a Bachelor of Architecture from the University of California in 1959, and served as a lieutenant colonel in the United States Air Force from 1941-46.

“Although we close this year with a feeling of accomplishment, we are confident that we can, and will, improve our service to the profession in the next one.”