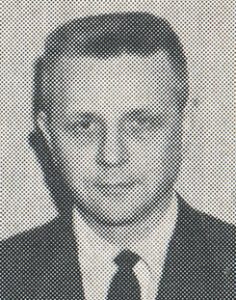 James H. Sadler became NCARB’s executive director in 1959. During his leadership, Sadler worked to smooth out the process for reciprocal licensure and reduce Record processing times. He also oversaw the Council’s move from Oklahoma City, Oklahoma, to Washington, DC, leading the organization through a chaotic time with limited staff.

Originally from West Virginia, Sadler graduated from Virginia Polytechnic Institute and State University in 1950 and went on to work at the firm of Martens Associated. After leaving NCARB in 1964, he returned to West Virginia to work at Charleston firm Zando, Martin, & Milstead Architects and Engineers. He was an active member of the American Institute of Architects (AIA) and remained involved with the West Virigina chapter.

“To be of value to the architect, the Certificate must be based on a complete and accurate Record, and Council eligibility requirements must be maintained at a level that will satisfy state requirements for the Member Boards.”