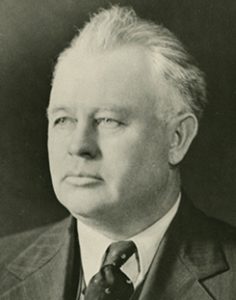 Iowa architect and engineer William L. Perkins served as second vice president and first vice president/president-elect before becoming NCARB’s 12th president in 1938. A year later, Perkins replaced Emery Stanford Hall as NCARB secretary, overseeing the administration of the organization from 1939-1957. As president and executive, Perkins oversaw the replacement of a senior and junior exam application with a single Council Registration Certificate. He also worked to update the minimum requirements for registration and to standardize the examination. Perkins was responsible for archiving much of the Council's early history and served on NCARB’s Resolutions Committee and the Committee on Credentials.

A Missouri native, Perkins moved to Chariton, Iowa, in 1917, where he engaged in the practice of architecture, engineering, and surveying. Perkins designed and supervised many of Chariton’s major building projects including the Chariton City Hall and Fire Station, Masonic Temple, Herald-Patriot Building, Ritz Theater, Yocom Hospital, Newspapers Building, and Hotel Chariton. Many of these are listed on the National Register of Historic Places.

“We have a complete life history, education, schools, certificates, diplomas, of many foreign architects. We are now the only place, anywhere in the world, where those Records are [located]. … You should sometimes see the letters we receive, about how grateful they are that we have their Records on file.”