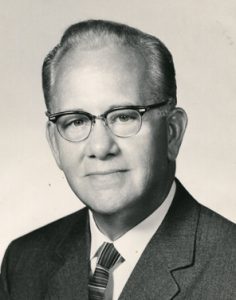 Albin Reinhold Melander, FAIA, of Duluth, Minnesota, became a member of the Minnesota Board of Architecture in 1938, serving as chair for over eight years. During his term as NCARB president from 1961-62, Melander oversaw the conversion of NCARB’s examination to a multiple-choice format, as well as improved outreach to Certificate holders. He also represented NCARB on the National Architectural Accrediting Board (NAAB) accreditation teams and at the Sixth Congress of the International Union of Architects in London, England, in 1961.

Shortly after graduating from the University of Minnesota, Melander became a partner at Starin & Melander in Duluth and would go on to found Melander, Fugelso, and Associates of Duluth in 1957. In recognition of his service to the profession, Melander was elevated to the AIA College of Fellows in 1963.