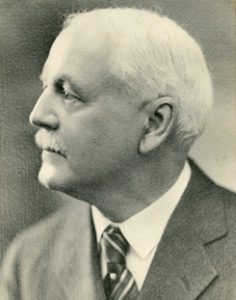 Arthur Peabody’s work began at the University of Wisconsin-Madison, where he served as campus architect, designing 60 buildings from 1905-1915 before being appointed state architect of Wisconsin in 1915. As an architect, he was inspired by the craftsman style for its open feel, and he often incorporated red tile roofing on his buildings. Among Peabody’s most notable structures are the Memorial Union on Lake Mendota, the Carillon Tower, and Wisconsin State Office Building.

During his time as the second president of NCARB from 1923-1924, Peabody introduced ideas that greatly impacted the organization. With strong feelings that NCARB was no longer an experiment but an established agency performing effective work for its constituencies, he encouraged cooperation from inactive states. During this time, Peabody also introduced the idea of the Council keeping stored records for architects, both for credibility and convenience, paving the way for what is now the NCARB Record.

“It appears to the Council that the most adequate examination is one which discovers, by normal and crucial tests, the skill and competence of a practitioner. These qualities may be determined without proceeding to extremes either as regards purely architectural subjects or those touching upon structures. The [prerequisite] is not a question which may be answered by yes or no, but one ... which may indicate in the reply an acquaintance with a wide field of information.”