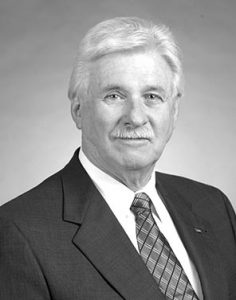 C. Robert Campbell, FAIA, of Albuquerque, New Mexico, was 2002-2003 NCARB president. During his tenure with NCARB, he provided leadership to several committees, including the Procedures and Documents, Examination, and Professional Conduct committees. He was also the NCARB representative on the NAAB Board of Directors, serving as a director and treasurer.

Throughout his presidency, Campbell focused on impediments to reciprocity for domestic and foreign architects as well as continued efforts to recognize architecture's role in the global arena. Campbell became a key figure in ongoing negotiations with the national architectural associations that were seeking reciprocal agreements with the U.S. at the time. He was a founding member of the Asia-Pacific Economic Cooperation (APEC) Architect Project, which helps facilitate the mobility of architects throughout the Asia-Pacific Region.

Campbell is a recipient of his state board's award of distinction for service to the profession of architecture and the distinguished alumni award from the University of New Mexico School of Architecture and Planning. He was the first recipient of AIA New Mexico’s Medal for Leadership, Ethics, and Mentoring in 2000, and he also received the organization’s Lifetime Achievement Medal in 2006. He received AIA Albuquerque’s Lifetime Achievement award in 2010.

“The ability to create a vehicle to evaluate other licensure standards and accept them is a tremendous asset in a global economy. We provide a portable credential that is invaluable to practicing architects.”