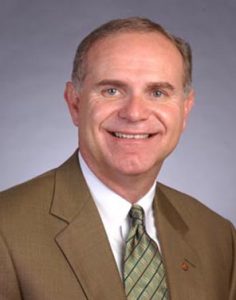 C. William “Bill” Bevins, FAIA, was elected NCARB president in 2002. Bevins’ public-interest career as a prominent regulatory official was launched in 1989, when he was appointed by the governor to the West Virginia Board of Architects. Subsequently, he was elected to the NCARB Board of Directors in 1995 from the Council's Middle-Atlantic Conference, which includes seven states and the District of Columbia.

As president, Bevins oversaw NCARB's efforts to negotiate agreements with Canada and Mexico as part of the North American Free Trade Agreement (NAFTA). Bevins was also instrumental in the development of the Broadly Experienced Foreign Architect (BEFA) Program, which allowed a path for architects licensed outside of North America to seek NCARB certification.

Bevins was elected president of the National Architectural Accrediting Board (NAAB) in 2006 where he was instrumental in the development of the NAAB’s Substantial Equivalency process for international program recognition. He also served two terms as a public member on the Accreditation Board for Engineering and Technology (ABET) Board of Directors, where he was able to bring an architectural accreditation, registration, and practice perspective to the engineering accreditation process.

Bevins graduated from Virginia Polytechnic Institute and State University, and became owner/vice president of ZMM, Inc., a Charleston-based architectural and engineering firm. He relocated to Charlotte, North Carolina, in 2002 when he joined FreemanWhite, Inc., a nationally recognized healthcare design firm. During his architectural practice, Bevins has held licensing status in numerous states and currently maintains an active registration in three states, as well as emeritus status in his original home state of West Virginia. Throughout his professional career Bevins has been active in cultural and social organizations in the Charleston, West Virginia, and the Charlotte, North Carolina, areas.