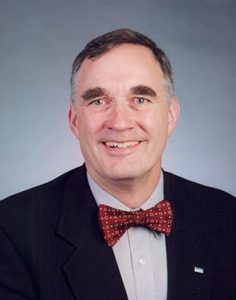 Frank M. Guillot, FAIA, NCARB, Burlington, VT, was first appointed to the Vermont Board of Architects in 1991 and was elected chair from 1994-1999. He was reappointed to the Vermont Board in 2007, and served until 2018. Guillot began volunteering for NCARB in 1992, joining the Architect Registration Examination® (ARE®) Subcommittee for Building Design. He went on to serve on the Examination, Internship (now called the Experience), International Relations, Practice Education, and Procedures and Documents committees, as well as several other ARE subcommittees.

In 1999, Guillot was elected by his peers to serve on the NCARB Board of Directors as the director of Region 1, which is comprised of Connecticut, Maine, Massachusetts, New Hampshire, Rhode Island, and Vermont. He also served terms as treasurer, second vice president, and first vice president before being elected NCARB President in 2004.

Guillot is a principal of the Burlington-based Guillot-Vivian-Viehmann Architects Inc., which provides residential, commercial, and institutional architecture and planning services. In addition to his dedication to NCARB, Guillot has served as secretary/treasurer, vice president, and president of AIA Vermont. He also served on the NAAB Board of Directors from 2006-2009, including two years as treasurer from 2007-2009, as well as numerous NAAB Accreditation Teams. In 2000, he was awarded the first AIA Vermont Civic Award, and in 2004 he received the President’s Medal from FCARM. In 2005 Guillot received the President’s Medal of Distinguished Service and honorary membership in the RAIC. He was elevated to the American Institute of Architects’ (AIA) College of Fellows in 2006 in recognition of his contributions to the profession. Guillot earned a Bachelor of Architecture from the Massachusetts Institute of Technology and a Master of Education from Temple University. He holds the NCARB Certificate for national reciprocity, and is licensed to practice in Vermont and New Hampshire.

“[NCARB's greatest accomplishment is] the NCARB Certificate. Being able to expand your reach beyond the narrow confines of your own home jurisdiction has made modern architectural practice.”