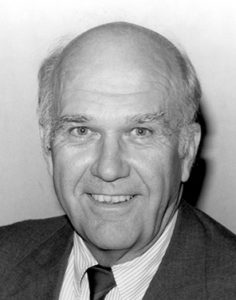 Herbert “Herb” P. McKim served as NCARB president during FY1990 after first being elected to the Board of Directors in 1984 as the director of the Southern Conference (Region 3). He served on the North Carolina Board of Architecture for 10 years, including one year as president. In addition, his contributions to the Council included being chair of several committees, as well as serving as NCARB secretary, second vice president, and first vice president/president-elect.

Born in Robersonville, NC, McKim joined the U.S. Marines after high school and served until the end of World War II. He graduated with a degree in architecture from North Carolina State University in 1950, and formed Ballard & McKim Architects in 1955 with his college classmate Frank Ballard. The firm became Ballard, McKim, & Sawyer Architects in 1959, and McKim was a principal there for over 45 years, designing many residential and institutional buildings throughout North Carolina.

McKim was also active in his community. He served two terms as the mayor of Wrightsville Beach beginning in 1993, and he and his wife established the Catherine S. and Herbert P. McKim Diversity Scholarship Endowment for Architecture to benefit students at NC State College of Design. In recognition for his extraordinary service to the state, Governor James B. Hunt awarded him with the Order of Long Leaf Pine, one of the highest honors given by the governor.