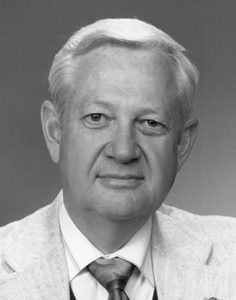 Homer L. Williams, FAIA, began practicing architecture in 1966. During his career, he served as a member of the Missouri Architecture Board and as director of the Mid-Central Conference (Region 4) which includes Illinois, Indiana, Iowa, Kentucky, Michigan, Minnesota, Missouri, Ohio, and Wisconsin. From there, he served on the NCARB Board of Directors as treasurer, second, and first vice president before being elected NCARB president in 1995.

A dedicated volunteer, Williams served on several Architect Registration Examination® (ARE®) committees, as well as the Regional Chair, Practice, and Procedures and Documents committees. He also served as chair of the IDP, Nominating, and International Affairs committees. As president, Williams greatly emphasized international affairs, assisting NCARB in entering agreements with Canada and improving relations with China and Mexico.

Williams earned his Bachelor of Architecture at Kansas State University in 1962 and received his Doctorate in Architecture from the University of Hawaii in Manoa, where he was also an associate professor. As principal and chairman of Williams Spurgeon Kuhl & Freshnock Architects, Inc. (WSKF) of Kansas City, Missouri, Williams led the firm to regional prominence. Williams received the Distinguished Service Award from the Missouri Council of the American Institute of Architects (AIA) in 1992 and was advanced to the AIA College of Fellows in 1995.