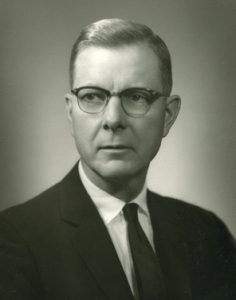 Ralph O. Mott, FAIA, of Fort Smith, Arkansas, dedicated over three decades of his career to advancing NCARB’s mission. Mott was first elected to the NCARB Board of Directors as secretary in 1958, serving in several positions before becoming president in 1965. During his presidential term, Mott focused on enhancing uniform standards for licensure and reciprocity, as well as preparing for the 1965 launch of NCARB’s national seven-part exam.

Mott’s service to NCARB began in 1945 after being appointed to the Arkansas State Board of Architects, where he would serve as vice-president and president. He also served as president of the Arkansas chapter of the American Institute of Architects (AIA).

Mott received a Bachelor of Architecture from Washington University in 1925 and would go on to cofound the firm Haralson and Mott a decade later. Mott was elevated to the AIA College of Fellows in 1966 and received the Fay Jones Gold Medal Award in 1983 by AIA Arkansas.