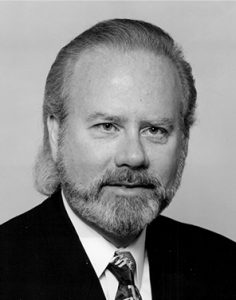 Robert “Bob” H. Burke Jr. served as NCARB president in 1992, becoming the only Florida architect to serve as both chairman of the Florida Board of Architecture and Interior Design and president of NCARB.

During his tenure at NCARB, Burke served as chair of the International Councils, Examination, Procedures and Documents, Professional Conduct, and Communications committees. As president, he focused his attention on international relations, particularly with Canada and Mexico due to the newly signed North American Free Trade Agreement (NAFTA). Additionally, Burke oversaw the launch of the Architect Development Verification Program, today’s monograph continuing education program.

For his exceptional service to the architectural profession, NCARB, and his community, Burke was awarded the Medal of Honor and Nils Schweitzer Community Service Award from AIA Orlando and the Distinguished Eagle Scout Award from the Boy Scouts of America.

Burke attended the University of Florida and is the recipient of the Distinguished Alumnus and Distinguished Service Awards from the School of Architecture. He co-founded his architectural firm, n.k.a BHM Architecture, in 1974, which became one of central Florida’s most respected architectural firms. In 2013, he started RHBj Consulting, offering litigation support services for design and construction matters throughout Florida.