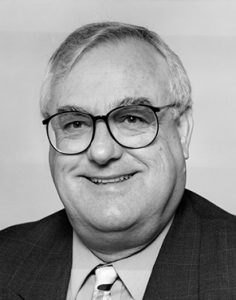 Robert A. Fielden, FAIA, was elected NCARB president in 1994. Before this, Fielden served as the Western Conference (Region 6) director, and secretary, second, and first vice-president on the NCARB Board of Directors. As NCARB President, Fielden established the NCARB President’s Medal for Distinguished Service, which is awarded to individuals who have dedicated a large part of their careers, energy, and wisdom to benefit the work of NCARB, the public, and the profession.

In addition to his work with NCARB, Fielden has served as secretary-treasurer of the National Architectural Accrediting Boards (NAAB), president of the Las Vegas Chapter of the American Institute of Architects (AIA), president of the Nevada AIA, former member of the AIA national board of directors, and has been elevated to the AIA college of Fellows. Fielden received his doctorate degree in architecture at the University of Hawaii, Manoa, and was one of the first 10 architectural doctors to receive this degree.

Early in his career, Fielden joined architects Jack Miller and Thomas Turner to form JMA Architects and Engineers, which soon became Nevada’s largest architectural and engineering practice. Throughout his career, Fielden collaborated with his wife Jane, who specialized in interior design and space planning, on many projects. In 1985, the Fielden’s left JMA to establish their own independent practices, RAFI and Fielden and Partners Space Planning and Interior Design. They continued to collaborate and are internationally recognized for their contributions to the profession.