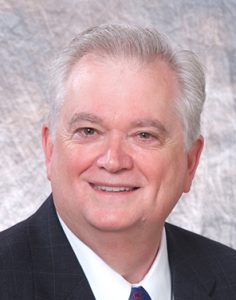 Ronald B. Blitch, FAIA, of New Orleans, LA, is past president of the Louisiana State Board of Architectural Examiners and the American Institute of Architects (AIA) Louisiana. He has been involved with NCARB since the early-1990s, beginning as a grader of the ARE. Since then he has served as an ARE coordinator and chair of the Committee on Examination from 2007-2010. He has also served on the Committee on Procedures and Documents, the ARE Technology Subcommittee, and numerous other committees.

He was chair of NCARB's Region 3 in 2009-2010 before being elected second vice president in2010 and first vice president/president-elect in 2011. He was installed as president at the 2012 Annual Meeting in Minneapolis in June 2012.

Blitch Knevel Architects specializes in the design of healthcare, senior living, university, and religious work and has received over 80 major design awards. Blitch is a graduate of the University of Notre Dame and its Rome Studies Center and is licensed in Louisiana and six other states through the NCARB Certificate.

2012-2013 NCARB President Ronald B. Blitch, FAIA, reflects on his term and discusses the 2012 Practice Analysis of Architecture, the development of ARE 5.0, and the Council's relationship with collateral organizations.