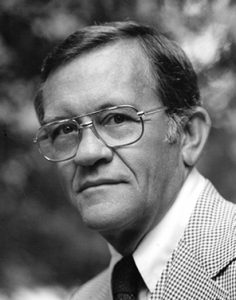 Thomas H. Flesher Jr. was elected NCARB president in 1982 after serving terms as the organization’s secretary, second vice president, and first vice president/president-elect. A long-time member of the Council, Flesher served as chairman of the Nominating and Resolutions committees and as a member of the International Relations Committee.

Flesher’s commitment to the health, safety, and welfare of the public was exemplified during his tenure at NCARB as he oversaw major changes in examination, certification, registration, professional development, and Council operations. In addition to these efforts, Flesher organized a study to research educational alternatives to a professional degree in architecture, laying the ground work for education requirements for years to come.

Born in Edmond, Oklahoma, in 1923, Flesher graduated from the University of Oklahoma and was a proud member of Sigma Alpha Epsilon. He joined the U.S. Army in the 1940s and trained as a navigator in the Army Air Corp during World War II. Flesher became a founding partner of Noftsger, Lawrence, Lawrence and Flesher and served as a member of the American Institute of Architects (AIA) for many years.